What Does The Supreme Court Denial to Review California’s AB5 Mean For Trucking? 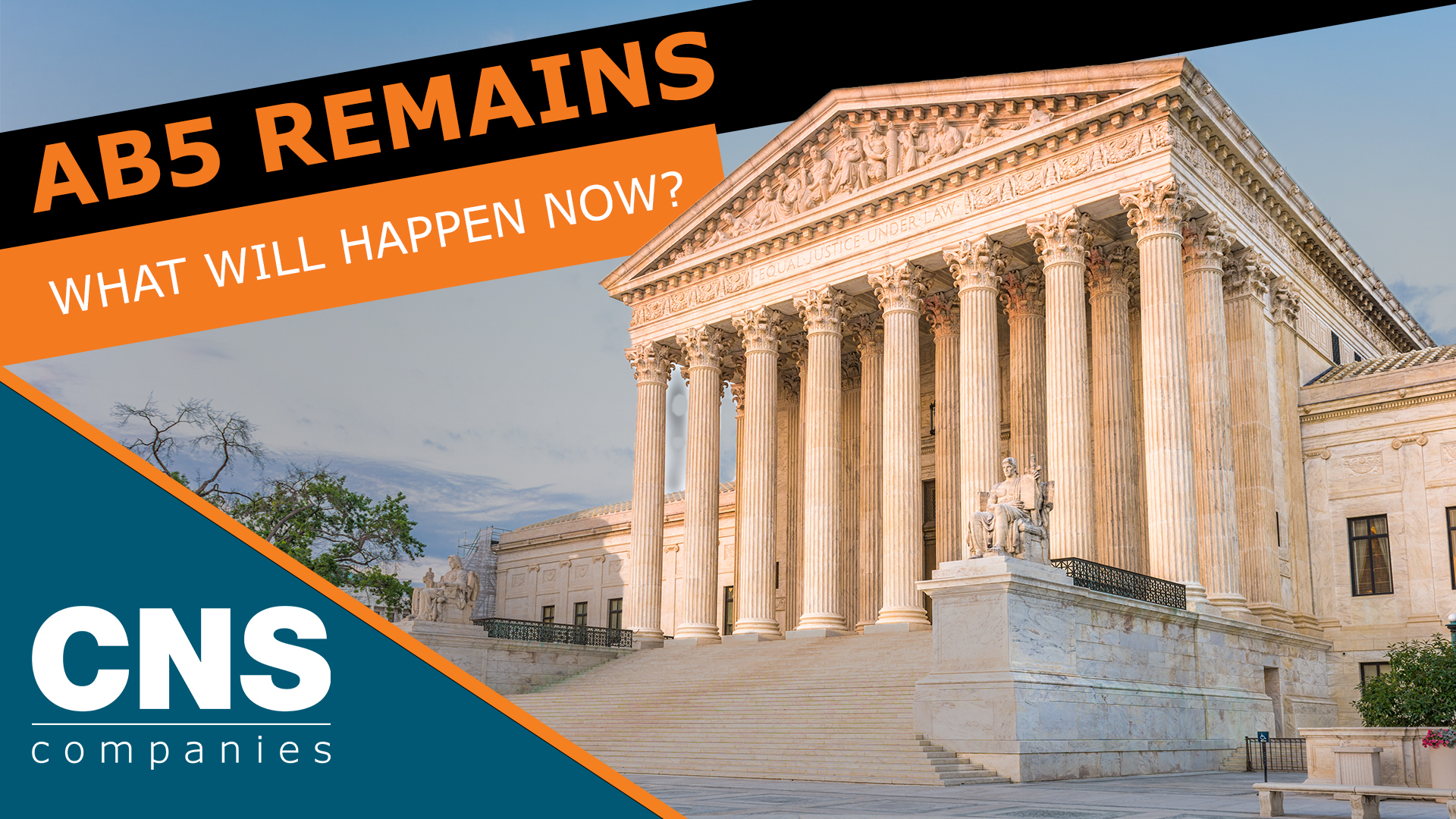 The decision to not hear the case means that a previous ruling from the U.S. Court of Appeals for the Ninth Circuit stands and that a preliminary injunction preventing AB5 from being enforced on motor carriers will end.

Before we dive into the legal matter, let us quickly review the AB5 law, see where we are at today, and what happens next.

On Sept. 18, 2019, California Governor Gavin Newsom signed bill AB5 into law that will make it more difficult for companies to classify people who work for them as independent contractors with the new ABC test.

Under the ABC Test, a worker is presumed to be an employee unless the employer can show that all three of the following “prongs” or conditions are satisfied:

The ABC is problematic for the trucking industry because of prong “B”, or whether a worker performs an activity that is at the core of the business’ mission. For example, a trucking company hiring a landscaper to take care of the grounds around a headquarters would not meet that test but hiring an independent owner-operator would.

What will change in California moving forward?

While lawyers are trying to figure out what to do next, California can immediately enforce AB5 as early as next week.

So, what is the likely outcome now that the Supreme Court denied hearing the last-ditch effort to get an exemption for the trucking industry?

No matter what, the industry will adapt, but it might be a painful process, especially with recession concerns, in the short term.

If you are one these leased-on independent owner-operators in California, or a company that has to make these big decisions, and you have more questions, please reach out to us. We can help you save costs from your safety department, help you with licensing changes, help you figure out trucking insurance, and more.

Why did SCOTUS not hear the case?

It may have to deal with the Solicitor General’s brief. Anytime the solicitor general recommends denial, it hurts the chances the court will take the case, though ultimately it is up to the Supreme Court.

The brief outlined the case and detailed reasons why the case should be denied in the Supreme Court.

While there is a lot of legalese here, I will try to sum it up quickly. Ultimately, the court of appeals held that petitioners (CTA) were unlikely to succeed on the FAAAA preemption issue. While this gets complicated, here is the basic rundown.

The appeals court explained that:

According to the Solicitor General, further review is unwarranted.

This is because they believe the “court of appeals correctly determined that petitioners were unlikely to succeed on their claim that the FAAAA preempts applying the ABC test as codified under California law to owner-operators, and the court’s decision does not conflict with any decision of this Court.”

Although the circuits have reached differing outcomes with respect to FAAAA preemption of the ABC test as codified under the laws of various States, those case-specific decisions do not create a conflict warranting this Court’s review.

Moreover, the need to resolve a threshold issue of state law make this case a poor vehicle in which to address the question presented, “Not just because of its interlocutory posture, but also because whether owner-operators could be covered by the business-to-business exemption remains a substantial and unresolved question of state law.”

CNS can help fleets with our new driver hire program

If AB5 does not include a trucking exemption, then there will be a flood of independent carriers going through a new hire process. There are a lot of rules around the hiring process, not limited to drug testing, CDL Clearinghouse queries, compliant DQ file process, and more.

To get these drivers on the road fast, Compliance Navigation Specialists has developed a new hire program that will streamline your hiring process.

Accuracy, organization and diligence are crucial to keeping your files in order and ready for an audit at a moment’s notice. Our DQF Management System is completely customizable to your individual needs. The consultants at CNS stay in communication with you regarding document updating, as well as offering comprehensive reports upon request, and reports of routine audits by our own DQF Auditors.

Our driver management and new hire management services will exceed your expectations. You focus on trucking, and let us focus on your driver file management. If you have a fleet of drivers, we assure you that you can’t do this cheaper in-house.

Eliminate the administration cost and have Compliance Navigation Specialists manage your files.

We will ensure that your information is collected, current, and complete. In addition, we will continue to update your files as required, and let you know when an updated piece of information is needed.

Our DOT Specialists are here to help!

Over the past 20 years, state lawmakers have passed various legislation to minimize vehicle idling. Generally, to trigger an investigation, anyone can report excessive idling.

Nearly 4,700 commercial motor vehicles in the U.S. with critical brake violations removed from roadways during 2022 Brake Safety Week! During the annual CVSA Brake

In this post-COVID and possible recession environment, there has been a lot of federal regulation discussions that may make 2023 a big year for the

What are you searching for?

Thank you for subscribing!

Is DOT Compliance your Top Priority?

Our DOT Compliance Programs ensure it is your top priority and keeps your business running.

Over the past 20 years, state lawmakers have passed various legislation to minimize vehicle idling. Generally, to trigger an investigation, anyone can report excessive idling.

Nearly 4,700 commercial motor vehicles in the U.S. with critical brake violations removed from roadways during 2022 Brake Safety Week! During the annual CVSA Brake

Can we help with DOT Compliance?

Do you think you need help with DOT Compliance?